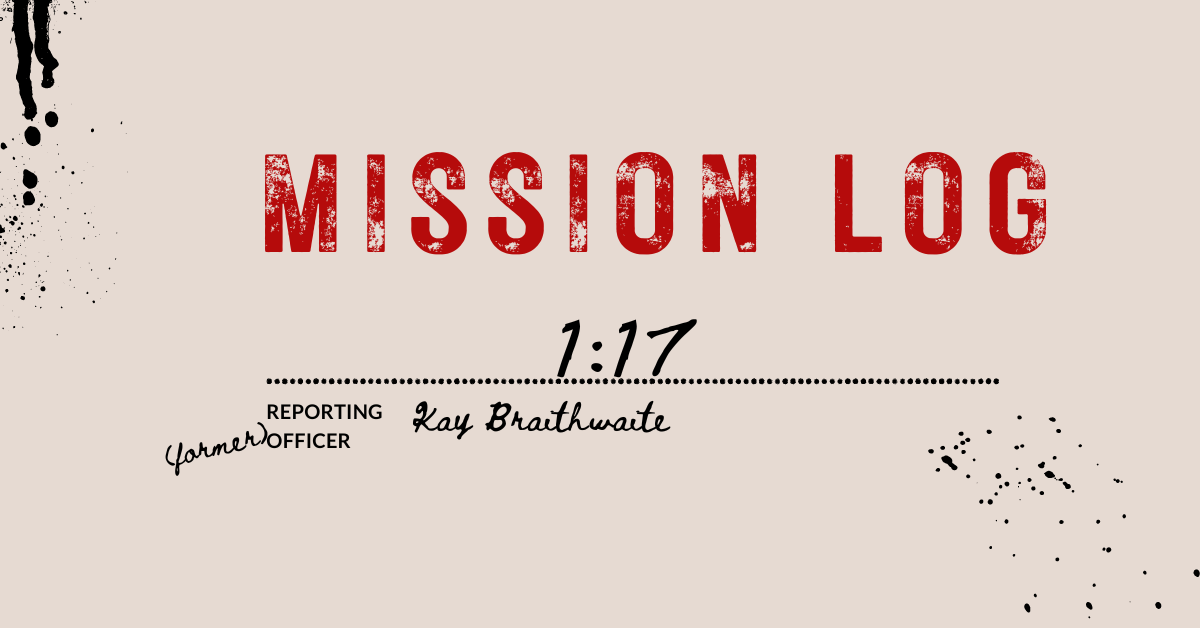 I still haven’t made it back to the bookshop, Colonel. I know you want me to investigate further over there; your last message seemed much more concerned about that than, I don’t know, the murderous bots that tried their best to end me the last time I opened the door. What are you looking for?

Unfortunately, it doesn’t matter. I didn’t get back, because today Ford tried to kill us all.

Now that Mr. Politician had seen the bots with his own eyes, it suddenly became imperative that he confirm their demise and chase down any potential stragglers. None of us knew if the mist had taken the bots out for good, or if it’d simply injured them so they had to leave us—me—alone for a while.

And this question seemed to haunt Ford with a burning fire. I wish I could believe it was because he felt guilty about not believing me. Sadly, I’m not so optimistic.

Did Ford go after the bots in a reasonable way? No. No, he did not. He took a team, one that didn’t include me. Fair enough, I guess, after I punched him hard enough to give him an excellent shiner—though he did deserve that.

Unfortunately, his group didn’t include Cane either. Or David, or Mila, or any of the people here with a pinprick of sense. He picked a couple of Bertie’s weight-lifting buddies, and he left in the night. Did leave us a note saying where he’d gone, though. Thoughtful of him.

If I’m being honest, Ford’s absence actually made for a superior morning. Quiet. Pleasant. Conflict-free. If I’d expected him to actually run across any bots, I might’ve worried about the guy, but his success never crossed my mind as a possibility. Rude, I know.

Anyway. Pleasant morning. Dr. Sandy had Bertram down in the medical facility by this point, and Harper’d gone to help them out. David and I were just sitting down to organize an expedition, aiming to plot a shorter route to the medical facility. We figured there had to be a way to get there without all the long halls and narrow steps. Another set of stairs, or even an elevator.

Everything else on the station was working. Why not an elevator?

So I figured we could do that, then circle back around to the bookshop like you asked. In all honesty, I was eager to see the place again myself.

We were about ready to set off when Ford came crashing back into the jungle. Staggered in, really, zigzagging through the place at a full-on run, that bounced him on and off the path. The man bruised himself on several tree trunks without ever slowing down.

His hair was standing straight up, his eyes wide and bloodshot, and I was about to make a wry comment about locking him out in his hour of need—yes, I am that petty and that unobservant, sometimes—when he charged at me, knocking me flat on my back.

I’m not the best hand-to-hand fighter, I’ll grant you that, but I do know my way around a defense maneuver or two. While the man was still in motion, I rolled, half aware of shouting voices and people running for us from all directions.

Usually, that move would end up with me crushing a guy’s knees and holding him down.

But Ford? He was unnaturally strong. I couldn’t control the fall the way I usually would, and those skinny arms rolled us right back around until he was crushing my knees. Painfully.

I don’t have young knees.

I struggled, fighting back a zing of panic when I met the man’s eyes.

They were blank, Colonel. Black, too, like ink spilled into the whites, except for a glint of silver in each pupil. I mean, they might’ve been made of polished rock for all the expression in them. The set of his mouth was perfectly relaxed, his brow smooth. Like he was trying to stay awake during a boring documentary, instead of attempting a murder.

I admit it creeped me out just enough that I stopped struggling. For a split second only, but in that second, Ford had his fingers around my throat.

And he pressed down. Hard.

I was vaguely aware of people around us, yelling, blurred movement to each side. But Ford squeezed my neck like a man possessed, and the borders of the world were already dimming as I struggled to pull in a breath.

A body crashed into Ford’s, knocking me sideways as he flew off my knees—and my throat, though I’d be remiss not to mention the knee relief—and slamming Ford into the sidewalk.

David. Ford fought him, thrashing wildly—still creepily expressionless, his eyes like stains—until Mila and Melanie each grabbed an arm and Cane joined them, plopping himself down on the man’s legs.

Four people. It took four people to hold him down.

Still pinning him at the hips, David frowned into Ford’s face. At first I thought he was hypnotized by those eyes, and the briefly oxygen-deprived part of my brain was afraid the possession might leak right on over to him.

It took me a second to follow David’s gaze to Ford’s temple. Where a thumbnail-sized bot had locked onto his skull like a bolt on Frankenstein’s monster.

I guess he found the bots, after all.

I should’ve seen it before when he’d had me pinned. To be fair, I was busy trying not to die.

With a grimace, David reached down and yanked the bot out of Ford’s head. It came away with a gruesome slurp, dragging a set of slimy black threads behind it. Threads that had been inside Ford’s skull. Probing into his brain. Or so I assume.

His eyes rolled back in his head, and he passed out.

Melanie’s face looked about as green as mine felt. David’s too. We probably should’ve waited for Dr. Sandy to rip out the bot. I’m not sure what choice we had, though.

Between David and me, we got Ford hauled down to the med bay and onto one of those fancy tables, where Dr. Sandy fired up the scanners—which they’d already learned to use, apparently—and checked him over.

“Doesn’t look like there’s lasting damage,” they said, looking over the incomprehensible data set that scrolled across the screen. I don’t know how they could tell, but I’m no doctor. I was still trying not to be sick, remembering the sound of those bot-threads pulling loose. “You say the bot possessed him?”

I shrugged. “That was how it felt. He tried to kill me.”

Dr. Sandy raised an eyebrow, like ‘how is that abnormal?’ Fair enough. “He was strong,” I added. “Incredibly strong.”

Sandy leaned closer to the screen, lips pursed. “I don’t see how… But we’ve got the bot now, so we can take a closer look. And I’ll draw some blood, run some labs.”

They plucked the bot out of the cloth David had wrapped it in and dropped the thing into a clean jar. It was too rusty and warped to make out much detail, but between Sandy’s medical prowess and Mila’s engineering know-how, I figure we’ll learn something about it eventually.

See? I can be optimistic. Every once in a while.

Ford stirred just then, and David actually moved half a step closer to me. Not sure if he meant to protect me or vice versa, but either way, I didn’t mind. He’s a good one to have watching your back, or so I’m learning.

Ford swallowed hard and opened his eyes, blinking a few times. No inky black, no silvery glitter. Just back to their normal gray blandness.

And you know what he said? The very first thing?

“I’m sorry, Kay. I shouldn’t have punched you.”

Could’ve knocked me over with a feather, Colonel.

David nudged me in the ribs, gently, so I rolled my eyes. “But you were possessed by a rogue bot, so no hard feelings.”

Ford blinked and sat up slowly, a crease between his brow. I expected him to ask more questions about being possessed. Instead, he said, “Are you sorry for punching me?”

“No. That was different.”

David didn’t nudge me on that one. He knows better than that.

And Ford? Ford actually laughed. A little, and it was followed up with a wince and a fingertip to his temple. But it felt like progress.

Maybe he’s learned not to go crashing after mysterious threats without an expert or a plan.

Even so, I can’t help wondering how many functioning bots are still out there. Did the mist stop them, like we thought? Did it take most of them down, leaving a few lonely stragglers?

Or—and this might just be my pessimism rearing its ugly head—did it fix them up and make them stronger?