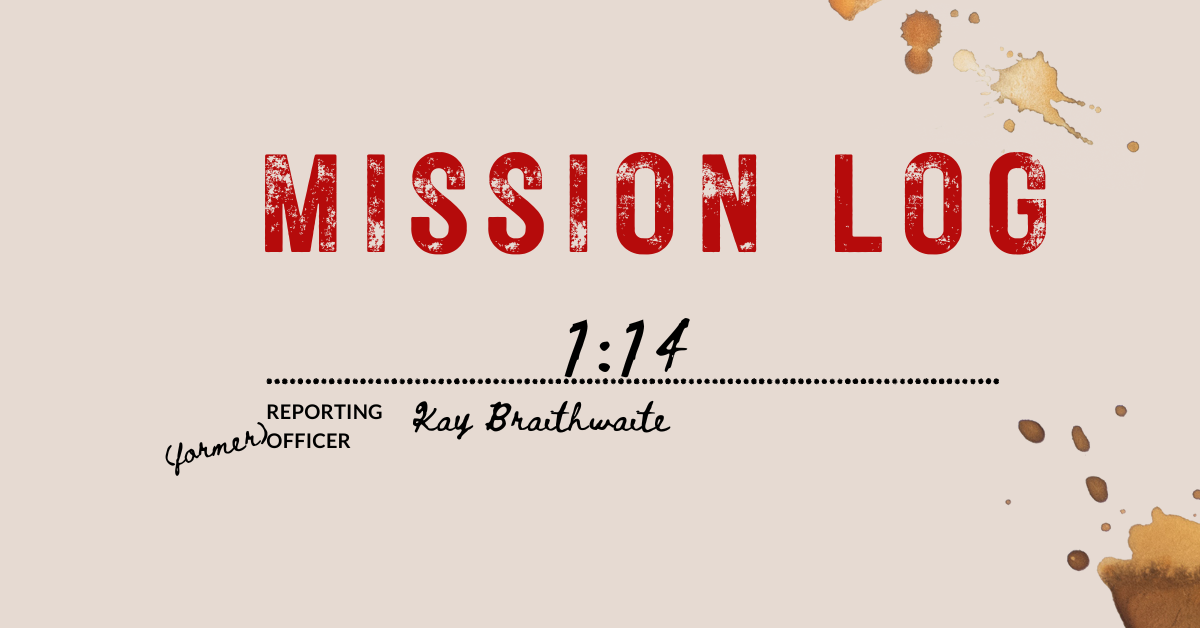 Any Alliance pilot worth her paycheck knows how to short circuit an escape hatch. No one wants to be stuck in a bird without multiple escape routes—which include, but are not limited to: jimmying, breaking, shooting, wrenching, kicking, screaming, and cutting through layers of glass and metal.

In the case of the mystery door, blunt force wasn’t necessary. After a quick search for a control panel, with David peering curiously over my shoulder, I was able to impress him with my wire-snipping genius.

At least, I assume he was impressed. He didn’t say.

It was almost too easy. I snipped the wire, something inside the door went pop!, and the little red pinpoint light above the latch went dark. Victory.

I took a breath, and then—recklessly, and ignoring every sensible warning I’d flung at Ford over his jungle escapades—I pushed the door open.

The first breath of mystery-room air that flowed out of the open door… it smelled like books. You know the smell, Colonel? Of course you do. It’s both crisp and weighty somehow, paper and ink and whatever magic they used to bind the spines. I love my digital reader, like Ethan’s; books are fragile and hard to produce out here. They crumble. They tear. But the smell of books… the smell of books is rare, and it’s real. It does something to a person’s brain.

It was probably archives, I told myself. Files. Reports. They’d be boring, but they could help us get some answers about this place.

Only… only my mouth felt dry with the hope of finding something… something more.

I was prepared for disappointment. I was.

But when I stepped inside, the room was full of books. Shelves and shelves of them, stacked and slotted and carefully arranged, they were far too beautiful to be boring. The shelves were tall, too, soaring all the way up to a twilight-colored ceiling, a dome that was dotted with pale stars.

Books upon books upon books. Not archive-type books, but cozy books—and the place echoed the feeling. There were egg-shaped reading nooks suspended from the ceiling and overstuffed chairs tucked into lofted balconies.

A library. Or, with the pay register there in the corner, a bookshop.

And that was all I had time to grasp before the silence erupted into a screaming swarm.

For one wild moment, I thought the books were leaping off the shelves to attack us.

David slammed into my back, knocking me to the floor, and just in time, too. It wasn’t books that swirled toward us, but drones—flying bots, a swarm of them, ranging from the size of my thumbnail to the clench of my fist, though luckily none seemed to outsize my hand. I’d never seen anything like them.

The bulk of the drone-bot-things went zooming toward the door, buzzing straight through the crack and out into the station. A few of them dropped behind to dive-bomb us, though, as if to cover their buddies’ escape.

One of the bigger ones slammed straight into my cheek as I tried to keep the smaller bots from burrowing into my head. Which they were clearly trying to do. They were hot and spiky, and I couldn’t tell what they were, exactly, but I definitely did not want them tunneling into my skull.

I was surrounded by them, by the smell of rust and oil, and the bots moved jerkily, as if they’d been out of service for a while. But that wouldn’t stop them from killing me.

David crawled, making for the nearest shelf, and I couldn’t see if the bots were attacking him, too, or if it was just me—I couldn’t see what he was doing with the bots in the way. Just the flash of a foot, a glimpse of his hair as he moved. One of the little [expletives] pierced my scalp, hard enough to draw blood, and the warmth of it trickled down my forehead and into my eye, making it even harder to see.

I couldn’t help thinking that if this was how they found my body, Ford would feel very smug indeed.

He’d act sad, though. For appearances.

Something whooshed above my head, and three of the bots clacked to the floor as David dropped a book on top of them with an echoing slam.

A heavy book, then. He stepped on it, looking way too satisfied as the bots crunched under the weight of the book. A reference volume, for sure.

The big bot skirted away—probably now harboring what would be a lifelong fear of encyclopedias—zooming out of the door while I just lay there, staring up at David and the stars on the ceiling above his head. It might’ve been my imagination, but I thought the dome had darkened a touch. Deeper blue, deeper twilight. There were lines connecting some of the stars, like a map of the constellations.

Or maybe there were just dizzy-stars cuckooing around my head like a cartoon.

David sat down heavily. His face was scratched to hell, too. “You OK?”

A gentle whirring sound made me whip my head in the direction of the shelves behind me, nearly throwing my back out. That’s the price of getting old, Colonel. Can’t fight a battle without throwing your back out.

If I could have gone running for the door at that point, I would have. Because the whirring sound was coming from yet another bot.

But this bot was different from the others. It was bigger, maybe the size of a basketball—one that was capped with a shiny sliver of metal, making it look like it wore a small hat—and it had two arms extending to the sides, with claws at the end of each.

It didn’t look like the others, but it was still flying. After the attack, that alone felt ominous.

The new bot flew right up to me, but it stopped short of attacking. Though David did pick up the book. Just in case, I guess. He seemed willing to wait it out, and he didn’t smack the thing when it extended a claw to me.

I looked at David. “Handshake?” he suggested.

I turned back to the bot, which was waiting. Patient. Not attacking.

Though it was probably ill advised, I wrapped my fingers around the claw. And Colonel, the bot helped me to my feet with a gentle tug and a few throaty chimes. I’ve never seen—or heard—anything like it.

Once I was standing, the bot let go of me, grabbed the book out of David’s hand and re-shelved it. Then it stopped, hovering in front of the shelves as if waiting for a customer to ask for a recommendation.

“Helpful.” And not at all murderous. I toed the dead mini-bots at David’s feet, half expecting them to jump up again and attack. They were rusty. Old. Not that it’d stopped them. On a certain level, I could relate to that. “What were those things?”

David pressed a finger to his bottom lip, eyes scanning the rest of the room. “I don’t know.”

“Good thing we got them out of here.”

“Or maybe they were in here for a reason and we let them out.”

David’s a nice guy, but for all his cheerfulness, he’s not always comforting. I guess we have that in common, come to think of it.

But the bots were gone, at least for now, and we were standing in a bookshop. A bookshop in the stars. Glancing over my shoulder, in case of more attack bots, I drifted over to the shelf where the friendly bot waited and bent to look at the spines. A thin layer of dust came away with my touch, but the spines looked new enough.

I couldn’t read the text on them. It almost felt like if I squinted, it’d look like writing I could recognize. But not quite.

“It’s in another language,” I said.

David came to stand over my shoulder. “Hub-based?”

I shook my head. The Hub wanted to standardize everything, it was true, the irony being that Alliance languages hadn’t really deviated very far from Hub, anyway. But they taught us Hub slang back in the war, enough to get by. “It’s not familiar.”

The bot darted out of its waiting spot, and I flinched. But it merely hovered in front of me, waiting. Like it wanted to show me more. “Lead on,” I said.

It did. Back past several reading nooks, where I would not have minded spending the day with a book or three, and over to a section of books that looked older. Much older.

When I bent to inspect the spines? I could read them.

“The Wizard of Oz,” David said. “Parable of the Sower. Station Eleven. The Three Musketeers. What is this?”

I shook my head. I didn’t know.

I still don’t. Why is it that David and I can read the spines on the older books, but the newer ones—they look newer, anyway—are incomprehensible?

Books. Classics. But what are the newer volumes? Where did they come from?

David and I explored the shop, taking our time, poking around in corners. With anyone else, I might’ve pretended I was looking for more bots. Ensuring the safety of the situation. But I don’t think either of us felt the need to pretend the place wasn’t completely enchanting. Dusty, sure. A bit messy in places, absolutely. But enchanting, nonetheless.

It’s not a word I use often, Colonel. In case you’re wondering.

By the time we left, the dome had definitely darkened to midnight blue, the constellations sparkling down at us like friendly eyes. I closed the door behind us, with every intention of returning to tomorrow. Ethan might’ve lost his reader, but he’d have plenty of books to entertain him now. I couldn’t wait to show him.

Again, Colonel, I have to ask: what the [expletive] is this place?