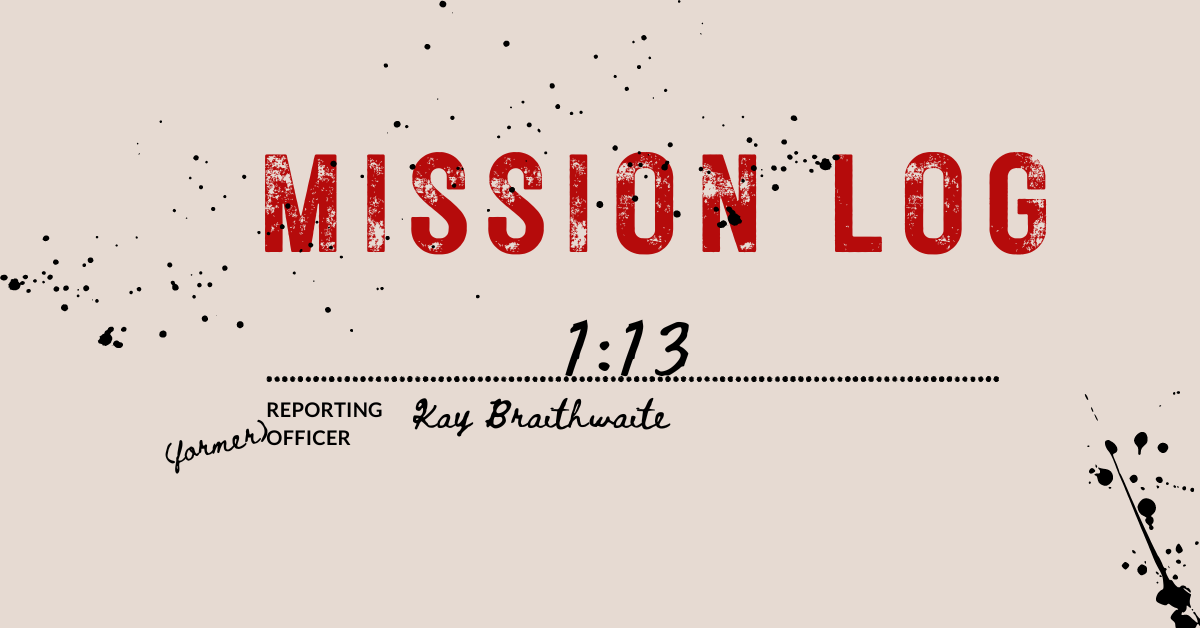 I didn’t think I was headed anywhere in particular after my blowup with Ford—the blowup being a hundred percent on my side and zero on his, which only made it more frustrating—but somehow I ended up back at my mystery door.

Everyone else was so entranced by the cute little twists and turns in the market sector, though truth be told, I found it all a bit creepy. Oh, I’m sure it was adorable back in its heyday. Whenever that might have been, and wherever. But now? Now, it’s a cobbled together brick-a-brack of abandoned storefronts with rusted-out hinges, smudged glass windows, and bare shelves.

There was something about this alcove, though, that pulled me back. Maybe because David, Ethan, and I sat here together for so long that night.

Or maybe it was just because the door was locked, and I dislike locked doors. Ask my former SOs about the truth of that one.

Anyway, I found myself at this door, and I tried the latch again. It’s one of those thumb-down latches, and it was stuck fast. I knelt and ran my fingers along the seam between the door and the wall. And I decided it’d be simple enough to pick the lock.

I don’t keep hairpins on me or anything like that, but I did have a splinter of wire in my pocket. It’s pliable and sharp, and it comes in handy sometimes when there’s a cockpit jam, so I keep it around.

As soon as I slid it into the lock, a red pin light flickered on above the latch, startling me. I blinked, and it was gone, but when I tried the wire a second time, the red light returned.

I ran my fingers along the seam again, feeling for any anomalies, and I could’ve sworn the thing was humming. Some kind of digital lock going on here.

Not pickable, in other words.

I let myself sit on the top step to rest a minute, my back to the door. It was definitely humming, the vibrations quiet against my skin.

Maybe I shouldn’t’ve pressed my body against it. Oh well. Too late.

If that’s hypocritical, so be it.

But so far I hadn’t encountered another spot on the station I couldn’t reach. And for all my warnings to Ford about proceeding with caution, there was an itch in my gut telling me I wanted to see what was on the other side. Desperately.

As I contemplated this, a sound echoed down the hall, catching my attention. Unless the sentient mist could play guitar music, I wasn’t alone here.

I should probably amend that. It wasn’t quite music. It was music adjacent, the notes hesitant and twangy, the melody halting. I don’t want to say it was terrible, but… well, it was. It was pretty terrible.

Might’ve been the mist playing, after all.

Yes, I’m aware that I should probably get some sleep.

I got to my feet, dusted myself off, and headed down the steps, following the sound of the guitar, figuring that one of the kids had swiped David’s guitar and was now attempting to play it.

Instead, I rounded a corner and found David himself. He was sitting with his back to one of the smoked-glass storefronts, his hair a mess, one boot untied. He held the guitar awkwardly on his lap, head bent in concentration, fingers slow and clumsy on the strings. To the point where I almost couldn’t believe what I was seeing.

This wasn’t the rusty, haven’t-played-in-a-while kind of musical skill. This was what-the-hell’s-a-guitar kind of experimentation.

Making enough noise to warn him of my presence, I crossed the hall and came to sit beside him. Up close, I could see his eyes were puffy, his cheeks pale.

He pressed his lips together. “Not looking good.”

No wonder David needed a moment. At least that made it sound like the guy was still alive, but for how much longer?

David was still cradling the guitar, running the fingers of his left hand through a series of slow positions on the frets. Like soldiers running a drill. New, clumsy soldiers.

“No offense,” I said, which yes, I know is the number one way to cause offense, “but given your attachment to that instrument, I thought you’d be…”

He laughed. The sound was soft and sad, but real, too. “First time I’m playing it, actually.”

He moved his fingers along the frets, the strings squeaking as he repositioned the chord. I wanted to ask more, but I felt like he was telling me, so I waited, eyes on his fingertips. I wanted to say that actually, for a first try, this was nothing short of miraculous. But I didn’t want to interrupt whatever he was going to say, either, so I waited.

Also nothing short of miraculous. I know.

David nodded. He might be the only other person here who knows with any real certainty that there is a war, that Mandel’s gone. That the Alliance may never come for us. “I joined up, too, a few years ago. Figured it’s a good way to tour the stars.”

Another nod, though this one might’ve been to the almost-music, to some beat going on in his head. “I left when our mother got sick. Stayed out.”

“Responsibility over adventure. I get it. Why you?”

He shrugged. “Sam’s the better pilot.”

“He’s a musician. And he’s damn good at that, too. This might be his most prized possession.”

“Mom passed last month, and I was moving to Second City. Sam didn’t trust the haul-bots with it, so I promised him I’d take it myself. Now… now who even knows if he’s…”

He trailed off, fluttering his fingers off the strings as if they had more strength to finish that sentence than he did.

“Not as exciting as yours.”

“Yes, well, it doesn’t end with a hero pilot working as a bus driver. Hard to compete.”

“I’ll need that story one day.”

I didn’t want to say it, but even with their separation and all, his story sounded a lot less… well, lonely than mine. People assume they know my story, and I just let them keep on assuming. Sounds better than the truth of nightly TV dinners and Colony Alpha reruns.

“I can ask the Colonel about Sam,” I said. “Least he could do is check up, after everything.”

David leaned over, nudging my shoulder with his. “Thanks, Kay.”

We sat there in silence for a few minutes, listening to the silence of the station. In a way, I think I preferred the clunky guitar chords. Weird.

“I guess we ought to head back,” David said after a while. “My brain’s going to short circuit here from trying to understand these chords.”

I dropped my hand as something clicked in my brain, inadvertently grabbing his leg and letting go quickly. “Short circuit,” I said. “I can short circuit the door.”

David raised his eyebrows. Intrigued, I hope. “What door?”

I got to my feet, careful not to grab his leg again. That would’ve been inappropriate. “I’ve got a hunch,” I said. “Come on.”