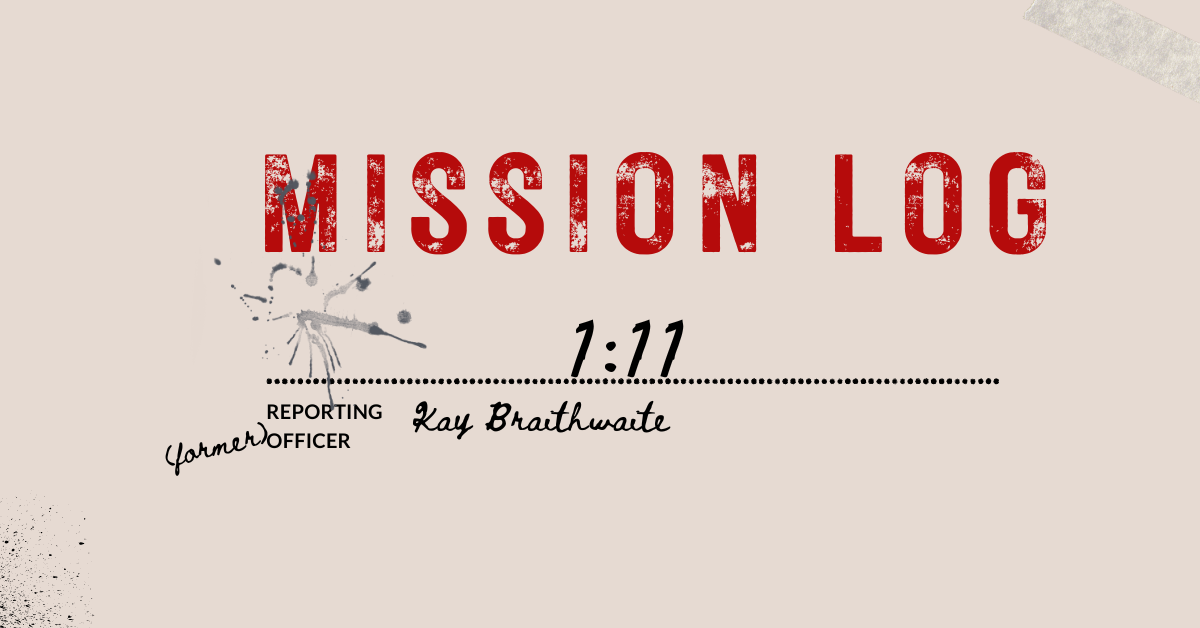 The whole way back from the jungle, we discussed keeping the place under wraps. Or I did, anyway; Cane’s not much for talking, and Ford couldn’t get a word in edgewise as I spoke at length about how we needed to convince everyone that exploring and scouting would keep us safe in a strange place.

Nothing ever stopped the man from jumping into a conversation when he wanted to be heard, or so I’ve learned over the past few days. All the way across Cane’s bridge and through the jumbly market section, past the mystery door in my little alcove and back around to the camp from the side, I talked. I reasoned.

I kid you not, we stepped out of the corridor and back into the bay where our camp was set up, and Ford—who’d nodded along with my speech the whole way—opened his mouth and said, “Guess what, folks? We’re moving!”

You’d have thought that his injured friend would have convinced him to take things slow—or that Bertie would at least have been his first thought—but no.

“That’s not what we discussed,” I said, as Cane beelined for Sandy. He crouched down to speak low, maybe because he didn’t want to scare everyone. More likely, though, he just didn’t want to delay Bertram’s care because of the fight I was about to have with Ford.

“You discussed it.” Ford’s smile was smug enough to punch, I’ll tell you that much. “But I’m not hiding secrets from these good people. They deserve to know that there’s a cornucopia of supplies and safety.”

“We don’t know what all might be living in there, or what kinds of traps the previous owners might have—”

I stuck my hands on my hips. Two can play at that game. “Predators. Leeches. Bacteria.”

“The Alliance sent us here, didn’t they? Unless you’ve heard otherwise from them, this place is safe.”

I didn’t know what to say to that one, obviously. You haven’t said this place is dangerous, Colonel, but you haven’t said it’s safe, either—and no one knows I’m in communication with you. No one except David, of course.

While I tried to formulate a response, Ford turned away from me. “Pack up. We’re going.”

Three guesses who they listened to. I don’t have Ford’s dimples, so clearly I’m not a trustworthy source of information or common sense. Cane agreeing with me didn’t help my case, either, especially since all he had time to do was throw the gruff opinion back over his shoulder as he hauled Sandy off to hopefully save Bertram’s life. Though I didn’t see any fancy medical equipment stashed in that jungle, so my hopes weren’t particularly high.

Ford conveniently neglected to mention Bertie’s injury to anyone else. Nice, right?

I’d have gone with Cane, but I didn’t trust Ford to lead everyone back to the jungle in safety. So I stayed, because I’m a sucker.

Case in point: there are kids here, and kids need someone who’ll watch their backs. Ethan fell in to walk with me as we lugged our stuff through the station, his digital reader tucked under his arm, backpack slung over his shoulders. I was glad the kid had brought that reader with him; kept him entertained, and he’d been sharing it with the younger kids, too.

“Is this jungle thing safe?” he asked, because the kid’s got a fair bit more sense than Ford.

I patted him on the shoulder. I was going for comforting, but I think it was mostly awkward. “We’ll see.”

Yeah, definitely more awkward than comforting. I can live with it, though. I’m all about honesty, Colonel—you know that, as you’ll have studied my file at length by now—but I also believe in doling out information on an as-needed basis.

I do understand the irony of that statement, given my history with the Alliance.

Anyway, we hiked through the market sector, which took some time because no one else had seen it before. They kept pointing at the storefronts and the closed-up carts, the cute little alcoves and all that. They pretty much ignored my mystery niche. Everyone except Ethan, who cast it a sad glance—probably remembering the night his dad’s voice had been ricocheted through these halls.

The place is weird.

It would’ve been good to hike straight through the station, but I hadn’t thought to look for a bridge button. Maybe Cane hadn’t either. Or maybe he, like me, had been thinking something along the lines of ‘let’s stick with the bridge that carried us safely across the last time.’

But the twisting market sector eventually straightened out into a direct corridor, and the group headed for the bridge. People were whispering now, if they spoke at all. Like they were afraid they might awaken something.

In an old story, it would be something dangerous and ancient, lurking in the deep. I’m no romantic; I’m just saying that’s how it is in the old stories.

In our story, it was fog.

We reached the point where the bridge met the cavern on our side, and the end of the bridge was obscured by a big, silvery clump of mist. Too thick to see through by a good measure, it danced outside the door with an almost metallic shine. Unnatural.

“Was that there before?” someone asked. I couldn’t see who it was, because I was staring at the fog, which definitely had not been there before.

The door was still open behind it, the warm jungle smells pulsing out into the station like a beacon. I’d have thought the temperature change might have caused the fog—or something chemical, I don’t know—except for the fact that it was writhing outside the door like a living thing, sending tendrils searching down along the walls. Like it was investigating. Searching for something.

A cloud, but a living one, a touch too silver for any natural fog I’d seen on Mandel. And a touch too… medicinal. It added a smell of rubbing alcohol to the sweetness of the jungle behind it, strong enough to land a bitter taste on the back of my tongue. Every fiber of my being said I should turn and run in the other direction.

But Ford being Ford? Yeah, he took a step toward it.