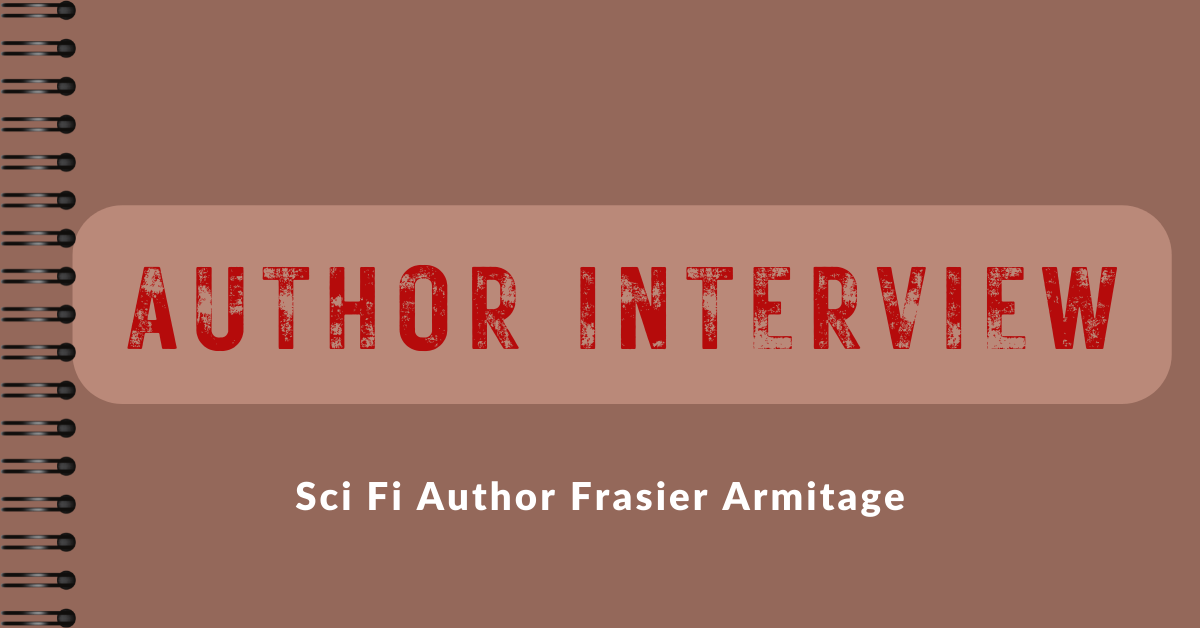 My story, ‘Ace in the Hole,’ starts with an illegal poker game on an intergenerational spaceship. It’s also a precursor to the Interstellar Trials books, which I’m kickstarting now.

Today I’m interviewing Frasier Armitage, author of the story Good as Gold. It takes place in a city where events in the present can change the past. It’s a lot of fun, and it reminded me of one of my favorite books, All Our Wrong Todays by Elan Mastai, because of its unique approach to time travel.

And read on for the interview!

KSS: Tell me about Good as Gold. Who are the characters, and what’s it about? Do the characters appear in any of your other works?

FA: Good As Gold is the story of a bank robbery that takes place in the city of New Yesterday, a place where events in the present can change the past. Robbing the bank — no problem. Getting away with the dosh before the city rewrites history — now that’s another matter!

Jenny is the heart and soul of the book. She’s a former-factory-worker-turned-criminal who’s shirked off the humdrum of the daily grind and dedicated herself to the pursuit of thrills, and she gets them however she can. She doesn’t appear in any of my other books… yet! But the city of New Yesterday is constantly changing, and so are my ideas for what this series could include, so you never know, you just might see her in a future story someday!

KSS: Your take on time travel is so unique. How in the world did you come up with this concept?

FA: That’s a great question. I’m so glad you think it’s unique! That’s something I aim for in my writing, so I’m chuffed to hear you think so.

I’ve had the idea of New Yesterday for over a decade. It all started in 2009 when I was the passenger in a car crash — someone ran into the back of us on the motorway and sent us veering off the road at 70mph. As I was recovering, I would’ve given anything to change what happened. But that car crash led to a series of events that ended with me marrying the most incredible person in the world, and I learned so much about myself in the process. So in some ways, if I’d have been able to change it, I don’t know who I would have become. And that idea fascinated me — the links between regret and identity, grief and purpose, history and now. I tried to explore those themes in different ways for a few years, and then one day, I just opened a blank document and typed the title “New Yesterday” and the rest is history. And I wouldn’t change it for anything!

KSS: How do you approach worldbuilding?

FA: My worlds grow from the concept and conflict of the story. Everything about the world hinges on that. It would be cool to have hovercars and futuretech in New Yesterday — obvs! I mean, who doesn’t like hovercars? —but the themes are about the past and present, not the future. So I haven’t developed the world as an advanced one. It’s more like a malleable New York, in constant flux, which you’re able to bend to your whims instead of the other way around. Buildings can change from one minute to the next — the city is a kaleidoscopic maze in some ways — but the buildings are still made of concrete, brick, and glass.

I think if the rules of the world go beyond the conflict and concept of the story, then the world itself can only go so deep. So I try to give the settings of my stories as much substance as possible in order to better ground the stories. And that means building them from the themes that are at the heart of the story, and not just doing something flashy for the sake of it, or throwing in a trope because it’s cool. Like, not every dance routine needs jazz hands, y’know?

KSS: [edited to add: there’s nothing wrong with jazz hands!!] What was the first story or book you ever wrote? What inspired you to get started?

FA: I’ve always had ideas for stories. If we went to the movies together, I’d be the guy who said: “hey, wouldn’t it have been really cool at the end if… etc etc etc.” But having ideas is different to writing them, and it was my wife who inspired me to get started. She gave me the motivation that I needed to sit down and write. And then I got the writing bug, and I don’t think there’s a cure for it.

The first novel I wrote was awful. It was an homage to classic sci-fi that took place on a future Venus, and was the beginning of a planned eight-book saga. But even with everything I’d learned from English courses under my belt, I didn’t really have a clue how to write properly. So I started learning, soaking up as much as I could from YouTube and putting the advice into practice. And it took FOREVER! Years and years of writing one terrible book after another. But I learned how to write by writing books, and eventually, I got to the point where my storytelling improved and it was ready to share. Trust me, you really don’t want to read those early novels. Unless you enjoy cringing at awful writing, in which case, I’ve got you covered!

KSS: Tell me about some of your favorite books/authors. Do they influence your writing?

FA: I’ve got two categories for this: classic sci-fi and contemporary sci-fi. In terms of classic sci-fi, authors like HG Wells, Edgar Rice Burroughs, and Philip K Dick blow my mind. It’s their ideas which appeal to me. I mean, imagine inventing the idea of a time machine. Wild, right?
As far as contemporary fiction goes, I’m lucky to interact with incredible authors on Twitter every day, and I’ve learned so much from them. But in terms of specific books which have influenced my writing the most, I’ll give you my top 3.
Recursion by Blake Crouch felt like the book I’d always tried to write, only better. It was everything I loved — a huge concept that played around with time in a fresh way. I was partway through editing a novel when I read it, and it really helped me to cement the flavour of that book.

The Cartographers by Peng Shepherd is a masterpiece. It’s so grounded but so fantastical, charming and disarming and unusual but familiar, and I love how accessible and how niche it is all at once.

Here And Now And Thenby Mike Chen is a great example of a time travel story that’s about more than just a cool idea. There’s a lot of substance to that book, and I want that for my own writing too.

KSS: If you could hop into one sci fi story world, which one would you want to live in?

FA: I know this is a boring answer, but could you beat living on the
Enterprise with Jean-Luc Picard as your captain? Holodecks, replicators,as much time as I want to just write and write and write, and Beverly Crusher hypo-spraying me to perfect health whenever I catch so much as a cold. Yes, please!

KSS: If our characters traded places and Jenny found herself stuck on the Lyra — an intergenerational spaceship several generations into its journey, and headed for a more authoritarian regime — what would she do? What kind of job would she have, and would she be happy about her fate to live in the stars?

FA: On the Lyra, there’s an illegal poker game which your protagonist, Wes, is involved in. Jenny would always be at that poker table. Except, she’d probably be betting with dares instead of chips. She might be sabotaging something just to see if she got caught. Or stealing as much as she could from the Lyra before hopping on an escape pod and running to another vessel in
the fleet to try the same thing there.

I think she’d find a way to cause chaos. But that’s because, in a lot of ways, the humdrum of daily life aboard an inter-generational colony ship would be even more tedious than working in a factory! I don’t think she enjoys being a cog in the machine.

But, maybe she’d meet someone who would change all that for her? Maybe all she’d need is the right encounter, and she could settle down on a ship. For the right person, she’d do anything. So if you could write her a perfect character to fall for, then you’d probably see a whole new Jenny.

KSS: Good as Gold takes place in a world you’ve explored with your other fiction. Can you tell me about the series it’s a part of?

FA: New Yesterday is going to be my debut novel once it’s out, and I’m hoping it’ll be released before the end of the year. To build up to its release, I’ve written a prequel novella called Yestermorrow, which shows how the city of New Yesterday got its start. For a limited time, it’s free to my mailing-list subscribers. I’ve also got a few more short pieces set in the city which will be coming out over the next couple of months. If readers enjoy Good As Gold, Yestermorrow, and New Yesterday, and they want more, then there might be a future to this series that goes beyond just one novel. I’ve got a much bigger trajectory for it in mind, but I’ve also got so many ideas for other stories rattling around in my brain, and I can’t keep them contained forever! So the future of this series is really up to the readers. Like the city, it’s in constant flux right now, which is kind of appropriate when you think about it.

Thanks so much for letting me interview you today, Frasier!

Find Frasier online at: www.frasierarmitage.com or connect with him on Twitter using the handle: @FrasierArmitage