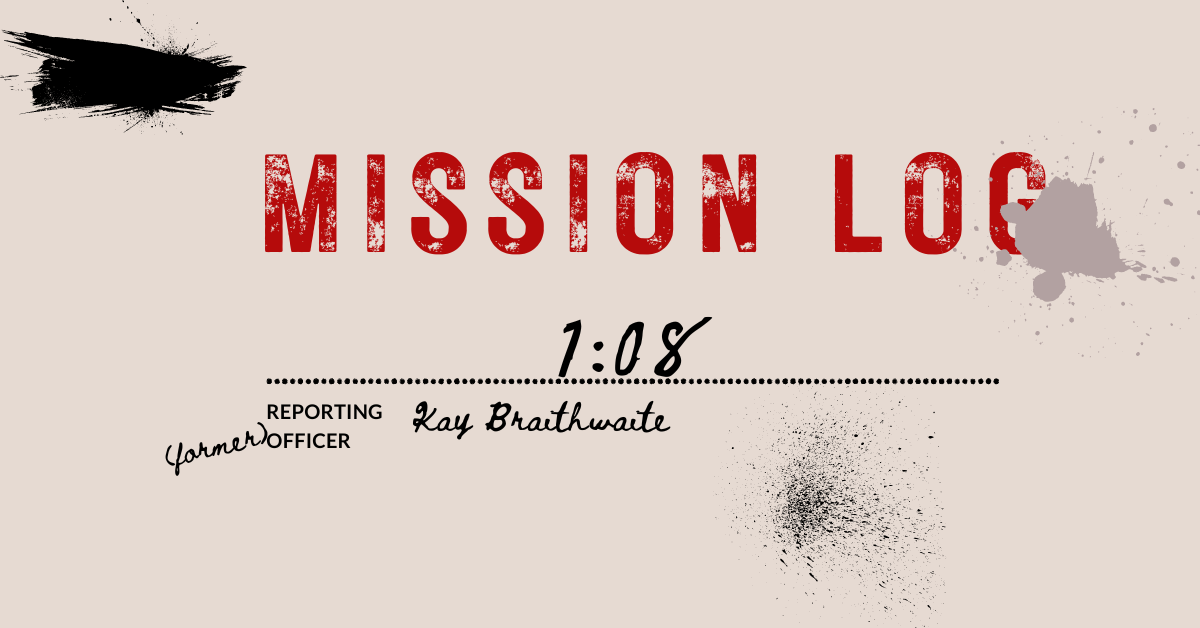 I’ve spent more one-on-one time with David since this disaster started than I have with anyone else in the group, which isn’t saying a whole lot. But as soon as we started toward the core of the station with our little expedition, I realized I how little that actually meant, in terms of actually knowing the guy.

As evidenced by the fact that, as soon as we got moving, he started to talk. But not to me.

David must have some social training I’m unfamiliar with, because he managed to move up next to Ford, easing Bertram aside with a kind of practiced ease. Like a bodyguard shuffling an undesirable away from his client.

And then he started talking to the man, as if Ford were an actual reasonable human being instead of a crocodile in disguise.

“Grew up in Second City,” Ford was telling him as the station closed in around us, like David was his new best friend. Maybe David’s got that talent for making everyone feel like a best friend. Or maybe Ford just likes to talk. “But Wellington’s got more opportunity, you know?”

Ford was still talking in the present tense, like he expected to jaunt away from the station in a few days at settle back into his old life. I know he doesn’t have the knowledge I have, about the war and all, but still. Seems naive to me.

“Have you got family back on Mandel?” David asked.

Ford chuckled, and it actually sounded more real than practiced for once. “Never really had the time. Building the career and all.”

He almost sounded a bit sad about it. You could still tell he was self-centered, though, because David fired off question after question—it would’ve sounded like the third degree coming from me, but David made it friendly—without Ford returning the favor. Not a single, ‘And what about you?’ or ‘What do you get up to when you’re not playing that guitar you hauled along with you?’

Bertram, who’d been shuffled back to lumber along next to me, gave me a sideways glance. “Where are you from?” he asked.

It didn’t take long for us to reach the coin I’d found on my first little expedition out here, and I bent to pluck it out of its place in the floor. Ford actually paused as the wall split in front of us—he’d probably been planning to skirt around it—and frowned back at me like I’d broken the station.

“Word to the wise,” I said, holding up the coin, “don’t step through without this.”

Yes, Colonel, I’m wise enough to test the theory. Ford watched me with unmasked suspicion as I carried the coin to the doors and thrust my hand between them. Though I did note that he stayed several paces behind me. He’s annoying, but he’s not stupid.

When nothing happened, and the floor stayed put, I took a tentative step into the room.

The coin vibrated in my hand. I flinched, but I didn’t fall to my death.

I think Ford actually would have told me I was nuts, had David not stayed attached to his hip to fire off another question.

I can’t pretend to know David’s motives. Maybe he was thinking that Ford would be easier to deal with if we got to know him, or that there had to be a kindly center under Ford’s outer layer of slime. Or maybe he really does just want to get to know people, whoever they are.

After a half hour of walking between rust-pocked walls, the coin vibrating in my hand every so often, I was pretty tired of hearing about every childhood shenanigan Ford had gotten himself into. I even caught Bertram rolling his eyes after the guy claimed to have saved all the frogs from dissection in his biology class.

This area of the station was just walls and floors and ceilings. No twisty staircases or shop fronts like the place David and I had found last night.

The passage was so monotonous that it was almost a relief when it cut off. Of course, it cut off in the most dramatic way possible: the ground ended in a ledge, followed by a great gaping hole. The path cut off so suddenly that David had to grab Ford’s arm and yank him back to keep him from walking right off the edge.

I think the man would have talked the whole way down.

In case you’re wondering whether the coin had made the floor abandon us again, it definitely didn’t; in this case, the walls dropped away, too, leaving an expansion of ink-black air on each side.

“There’s a door.” David, bless him, had been focused on the far side of the gorge while I’d been contemplating the drop. I followed his gaze across to what looked like a corrugated garage door, shut fast against the far edge of the door.

Underneath it was a strip of metal that looked very much like it might be holding a bridge. Only it’d been retracted.

“Ten bucks says we need to be on the other side of that door to extend the yellow brick road,” I said.

“It’s from one of the ancient texts,” I said absently. The Wizard of Oz is one of the stories that made it out here. I’ve probably read it a hundred times.

If we could secure some tools, we might be able to swing across the space, or build a makeshift bridge. Arthur Cane seemed like the kind of guy who might have something useful in his pack. But what would we do once we got there? Blast through the door?

I would have liked to think it through, stand there and make a plan of action. Maybe return with some safety equipment.

Unfortunately, at that point Bertram spied a ladder. And before any of us could say ‘hey, maybe we should test it since half the metal in this plate is rusted,’ he’d already dropped over the edge and started to climb. “I’ll tell you what I find, boss,” he said.

Boss. Please. Even Ford was looking at him like he’d lost his mind.

Bertram’s head disappeared over the side, and I bent down, risking a glance over the edge. “Get back up here, Bertie,” I said. “This isn’t the time to experiment.”

“It’s fine,” Bertram called up. All I could see was the crown of his head.

And then, with a wrenching squeal, the left side of the ladder broke loose, popping away from the wall like it’d been peeled. Bertram’s weight swung the thing to the side, and Ford called for him to climb back up.

Which he did, even with the ladder tilting wildly back and forth above the chasm. I threw myself to the ground, lying flat and reaching out a hand. Bertram was still several steps below, and he raised his hand even as he struggled up the ladder, straining to reach me. I felt David’s hands close over my calves for extra insurance, and I strained farther.

The right side of the ladder gave out, popping out violently enough to smack my hand back. Bertram’s fingertips fell away, and he went flying back into the chasm, screaming.

We heard him hit the bottom, Colonel.

“He might be alive,” Ford said. He was searching the ledge, almost like he hoped he might find a second ladder. I’ll give him that much credit; I think he’d have started down it, if he had found one. “We don’t know what’s down there.”

What was he expecting, a trampoline? A pile of pillows?

I still had my chin on the edge of the gorge, could still feel Bertram’s fingertips slipping out of mine. The guy was a loudmouth, but he didn’t deserve to die. I dropped my forehead to the metal, straining to listen for a sound, for a groan. For any indication that he might have made it.

A coil of rope landed next to my cheek, and I sat back, looking up to see Arthur Cane. I didn’t know when he’d joined us, just that he was fussing with a machine that appeared to be holding one end of the rope. As I watched, Cane clamped the machine to the wall and tested his weight on it. Apparently satisfied, he kicked the coil of rope off the edge and watched it fall.

“Fools,” he said, as if any of this was our fault. I couldn’t even blame Ford, who was standing there looking green, like he might throw up. “Let’s get going, then. It’s a long way down.”