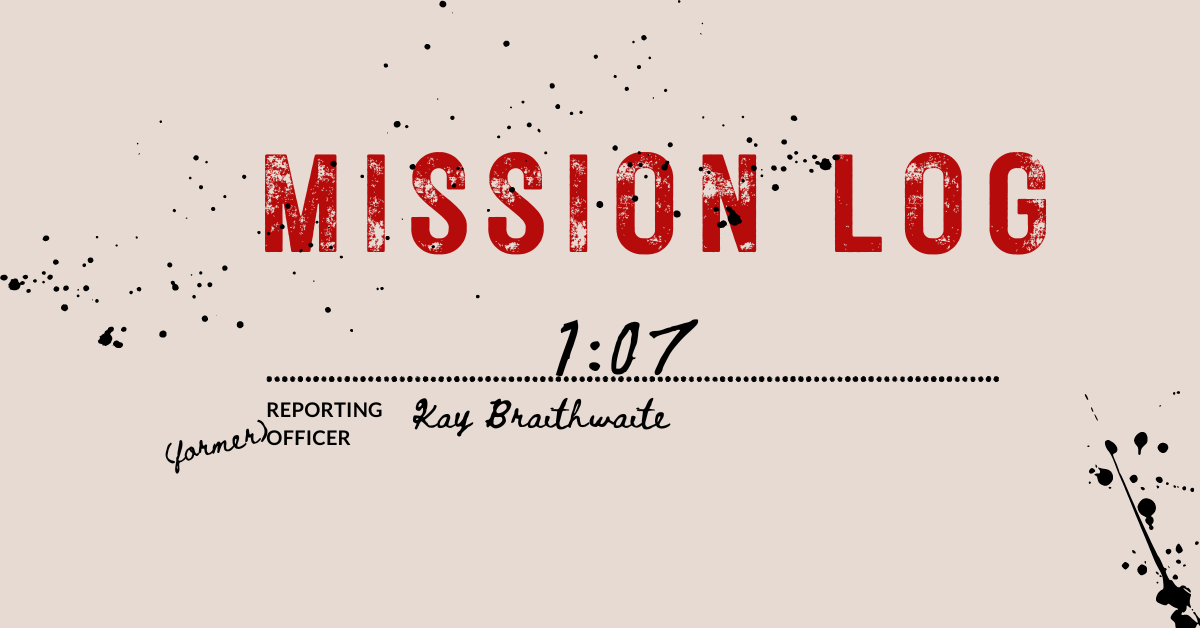 Sleep wasn’t an option after David and I guided Ethan back to our little camp. Feels weird calling it a camp, with the dusty air and the vacuum swirling—or not swirling, I guess—outside the windows. But that’s what it is, everyone all hunched up on transport blankets, using their suitcases as pillows.

Oh, the kid fell asleep easily enough. He’d worn himself out after all that sobbing and passed right out on David’s shoulder when we returned. But David and I just sat there. Awake. Silent.

What is there to say, after a ghost speaks to you? Ross’s last words. There’s no way the station should have that information. And yet, it does.

I’d think I was crazy, but David heard it too.

When the others finally started to stir—first the little kids and the mom, then Mila and Harper, everyone sitting up slowly and probably wishing for a good hot breakfast—David shifted a little closer to me, careful not to wake Ethan. “I think it’s clear we need to learn more about this place,” he said.

Yes, like what’s on the other side of that iron door and why it’s locked when all the other doors we tried in that section weren’t.

“Does your contact know anything?” David asked, still keeping his voice low because he’s not an idiot. He knows as well as I do that if Ford finds out I’ve been communicating with the Alliance, this tech scroll would disappear out of my pocket in a second.

I could only shake my head. “If he does, he’s not saying.”

But yeah, I was looking around at everyone and the makeshift camp setup, and I couldn’t help thinking that this wasn’t going to last. First off, the emergency rations in the transport will only keep us going for so long. If there’s a pantry full of freeze dried mushrooms or something on the station, we need to find it.

Also, we need a more secure place to hide out. There’s a not-zero chance that Hub pilots will come after us here, and we’re much too vulnerable sitting right by the bay.

Ford was too busy politicking to take useful action, so I made a quick decision and got to my feet before I could change my mind.

“Huddle up, everyone,” I said. “We need to have a family meeting.”

I swear I saw Ford’s head snap up from halfway across the bay, like he was a shark smelling blood in the water. Or a challenger. My animal metaphors are mixed, but you get the idea.

The mom was looking at me with hopeful eyes, and Mila was nodding, so I decided to direct my speech to them and hope the others would listen in, too. “We need to find out a bit more about where we’ve landed,” I said. “I think we should put together some exploration teams.”

Ford, as expected, immediately got to his feet and headed toward where I was standing. “Thanks for your input, Kay,” he said, with that false baritone note in his voice like a half laugh. “Not sure we can do anything until we’ve had breakfast.”

And then, a full-on fake laugh.

I think we’re going to have a Ford problem, Colonel.

“We need to find out if there are more stores on the station,” I continued, as if he hadn’t spoken. “And which areas are safe for us to use.”

“Why wouldn’t they be safe?” Ford posed the question like it was the most obvious thing in the world, then waved it away with his hand as if someone else had asked it. “It doesn’t matter, anyway. The Alliance knows where we are, and they’ll come get us. Deliver us to a safe location. We just need to be patient.”

“That’s true,” the mom said. “I’m not sure we should take on any more risk than we need to.”

But Melanie was still looking at me, not at Ford.

“The Alliance is a bit busy right now,” I said. “Given that the Hub just usurped Mandel’s moons and brought the planet to its knees. We’re lucky we got out at all.”

“You don’t know that,” Ford protested. “Our forces are the best in the system, Kay. They’ll have defeated the Hub by now.”

David, who’d stepped up beside me at some point—not sure exactly when—gave me a sideways glance. Like, you going to reveal your secret?

No way. Experience has taught me that once a secret’s out, it’s out. There’s no slurping it back in just because you made a mistake. I’ll hold onto it as long as I can.

Pretty sure Ford’s beyond taking orders from anyone, including you, Colonel. If he finds out a war’s raging, he’ll turn this place into his private dystopia.

Okay, that’s probably a little harsh. But he’ll be even more annoying than he already is. No doubt in my mind.

A shadow peeled away from the notch between the wall and the bay doors, and I nearly jumped out of my skin, but it was only Arthur Cane, getting to his feet, his pack squarely on his back.

I expected him to step forward, say a few words, but instead he just stalked off. The man’s like a lion on the hunt, silent and definitely deadly.

“Right,” I said. “Cane’s taking the left hall. David and I saw the right hall last night, so maybe we can go back that way.”

And visit that locked door again.

David said, “Maybe it would be better to do a straight shot. Find the heart of the station.”

For a musician, the guy isn’t bad on tactical. I’ll admit I’m itching to get back to that door, but he has a point. Station controls are more likely to be in the center, even if something’s telling me to find out what’s behind that door.

“Heart of the station it is,” I said. “Anyone who wants to come, join me up here and we’ll split into groups.”

Of course, the first person to show up at my knee—okay, he’s taller than that, it was my shoulder—was Ethan. The kid had dark circles stamped under his eyes, which were still puffy from crying, but he was bouncing on the balls of his feet. “I want to come.”

He started to frown, but I held up a finger. “I mean it. Someone needs to keep track of the search parties. Write down who was in each one, when they left, when they returned, and what they found. Can you do that?”

Ethan frowned at me, like he was all too aware that I just wanted him to stay put. “But—”

I leaned in close, put my hand on his shoulder. “You know,” I said, “I’m not sure there’s anyone else here I can trust.”

Ethan’s eyes widened, and he looked at me for a good, long moment. Kids know when you’re [expletive]-ing them, but it’s the god’s honest truth when I say I was not.

I needed someone honest to keep track. Ethan’s honest.

And wonder of all wonders, he pulled a notebook out of his back pocket and retreated back to the wall, keeping an eye on everyone as he went. I had a feeling we’d return to find he’d catalogued our every movement.

“That was well done,” David said.

I’m finding that it can be easy to forget when David’s hanging around nearby. He’s quiet, you know? Again, not what I’d pictured a musician to be like. He was just standing there, hands in his pockets, giving me this little smile. Like he knew something I didn’t.

“Thanks,” I said. And I think maybe we would have kept looking at each other for another second or two, except that Ford was the next in line.

I doubted he’d be as easy to placate as Ethan. Or as reasonable.

I gave him my best stern-transport-pilot look. Usually worked on kids who were trying to scratch curses into the back windows. “Yet you’re wearing a pack. And so is your puppy.”

That last bit, I aimed at Bertram, who was hovering behind Ford like a kid hiding behind his mommy. Only in this case, the kid was a good foot taller than his mommy, and afraid that the mean, retired pilot might bite his nose off.

Ford just smiled at me. Funny, how different his smile is from David’s. Smarmy. Snaky. “I’m coming along to keep an eye on you,” he said.

Ford shook his head and started off, like he was used to leading expeditions into rundown space stations. Like this had been his idea all along.

I’ll let you know what we find.