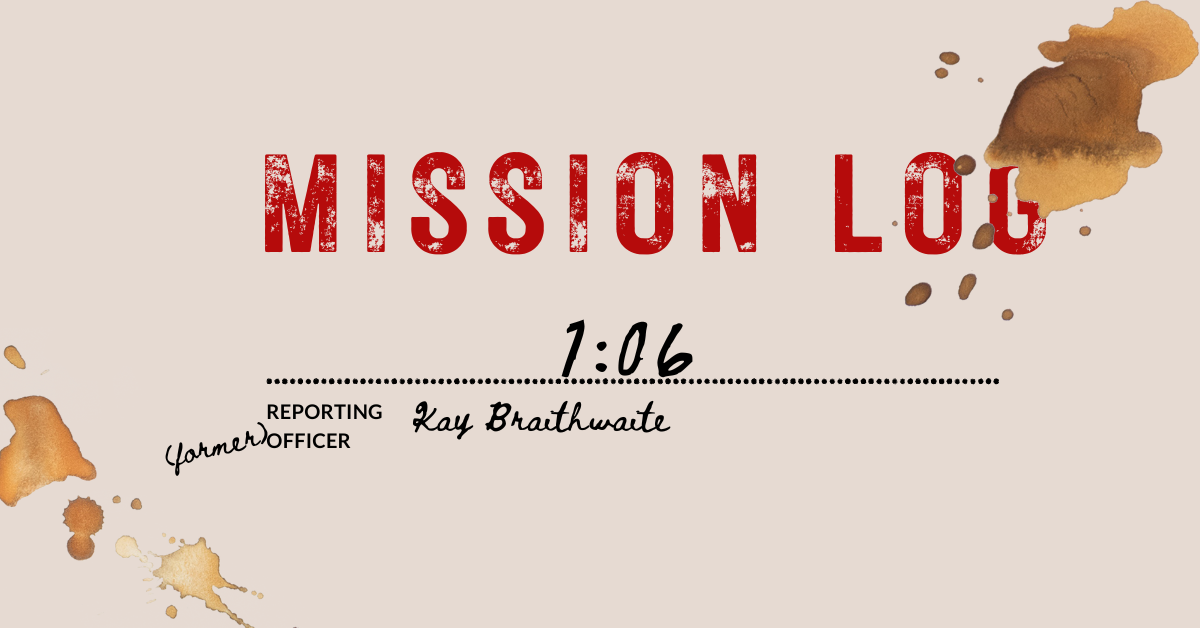 I don’t get it, Colonel. You want me to live out here on this station like a regular civ, but you’re also ordering me to send my homework along every night like a good soldier.

Maybe you’re testing me. Maybe you want to see if I’m capable of falling in line.

I can, Colonel. I really can. Here’s today’s log.

David woke me early this morning with a hand on my arm. I was dreaming about cursed coins and pirates, so he’s lucky I didn’t punch him in the throat.

I sat up, and he was crouching there beside me in the dim almost-darkness, his hair all mussed. No guitar in sight, thankfully. “Ethan’s gone,” he said.

“I missed the meet and greet,” I said. “Who the [expletive] is Ethan?”

David might’ve chastised me for not knowing, I guess, but he looked much too worried. Besides, I don’t think he’s the chastising type. “The kid,” he told me. “The one who booked it off the transport.”

Right. Probably should’ve known that, since he’d been yakking my ear off before the attack. “Maybe he went to pee.”

There were, thankfully, working restrooms on the station. Bless this place’s mysteriously functioning systems.

Right. No more sleep for Kay tonight. I got up, slipped on my shoes, and followed David away from the sleeping circle of refugees. We’d elected not to set a watch—well, Ford had elected not to—because what could we possibly need to watch for out here?

Aside from Hub attackers and the occasional floor that drops out from under our feet. You know, the usual.

Mila agreed with me, but we couldn’t rotate a watch on our own. And the place did seem pretty quiet. After the disturbance with Bertram, I don’t think either of us wanted to start a fight.

Judging by the thick coating of dust across the floor, this place had been quiet for a good long while. As David and I tiptoed away from the group, I could make out three sets of footprints heading into the corridors beyond. Mine led straight into the station, with Mila’s right behind. They were messed up, since we’d come back, but it was pretty clear where we’d gone.

A smaller set of footprints led off to the right, disappearing behind a wall.

“Why wake me, instead of Ford?” I asked as we followed the prints down a short set of steps and through a narrow hall. Lots of narrow halls in this place. If we give the station a name, I vote for Labyrinth. Or Pain in the Ass.

David was striding along next to me, every muscle in his body tense, as if he expected the kid to be trying to get out an airlock or something. “I want to find him, not talk him to death.”

I snorted. “I did not know you had that in you.”

Apparently so. I’d’ve expected him to learn everyone’s names—maybe compose a catchy song for us all to remember them—but I wouldn’t have expected him to check on the kid in the night. Unless Ethan was his kid. He’d made sure the kid was eating, hadn’t he?

We followed the footprints down a tight stairwell, and it occurred to me to wonder whether the hole Mila and I had almost dropped down could be accessible from below. Maybe I should be mapping while I walked.

“Why would Ethan run off like that?” I asked, doing my best to make it sound like I was not fishing for information about David, and the possibility of Ethan being his kid.

And Ross’s fighter had exploded right in front of us, just about three days ago. [Expletive.]

David was scanning the hall like he expected the kid to come leaping out of nowhere at any second. “He likes you.”

That much was clear. “Yeah, but I can’t figure out why.”

“I can’t replace his parent.”

I will admit that I wasn’t precisely following the conversation, or David’s meaning. But before I could say as much, Ethan’s voice echoed down the corridor ahead, sounding tinny and sad. He didn’t sound like he was in pain, but like he was… I don’t know, calling out to someone.

David broke into a run, and I followed on his heels as he booked it around the corner, rushing into a room with white, screen-like walls and grooves in the floor. Each corner had a gap, and I had the strange sense that the walls could pivot. Maybe if we found another coin.

At least the door didn’t close us in. So at least there was that, for a positive.

But Ethan wasn’t there, either.

David was still moving, edging through one of the corner gaps like he could still hear Ethan’s voice. The floor wasn’t dusty here, though, and though the footprints led into the room, there were none to indicate which way the kid had gone.

“We should split up,” David started, but I cut him off.

“No way. Mila and I would be dead if we’d split up the other day. We stick together.”

David hesitated, lips pressed tight like he might try to be firm with me. Would’ve been interesting to see him try, but he must have thought better of the idea, because he nodded.

As soon as I followed him through the gap in the wall, I heard Captain Ross’s voice. It didn’t sound like it was coming from some station announcement system, either; it sounded like he was speaking in my ear.

Flight squad four-oh-nine, protective formation, he was saying, Trig, you take the stern. Perk, pull an undercut with Coventry on your wing. Let’s get these people to safety.

The call signs. Trig, Perk, Coventry. I knew them all, could picture them in my mind. I helped train a couple of them. How many had made it off Mandel alive? How many were dying on the other side of the system while we were stuck on the creepiest station in the galaxy?

And had Ross known his son was onboard the transport? Probably. He’d been trusting me with his son’s life, and he hadn’t even told me. Something about that made my throat tighten, and I swallowed, angry at him for dying and angry at myself for not knowing the kid’s name—for not knowing he was Ross’s kid—until today.

I turned my head, trying to make out where the voice was coming from. Whenever I turned, though, the sound skittered away, as if Ross were moving farther away from me.

I know what you’re thinking. It couldn’t have been Ross speaking. But when I looked at David, his skin was chalk-white, and I knew he could hear the Captain’s voice, too.

We pushed through the narrow hall and onto a… Well, a street. I don’t know what else to call a wide strip full of abandoned storefronts and twisting staircases leading every which way. An old market sector, I guess. Someone’s really going to need to map this place out.

David opened a few doors, stuck his head inside and called Ethan’s name. My voice was still stuck in my throat, ears ringing with the sound of Ross’s voice, so I was glad for his ability to speak.

I don’t believe in ghosts, Colonel. I don’t.

We found the kid huddled at the top of a zig-zagging staircase, tucked into the frame of a huge iron door. He was all folded in on himself, his pack abandoned on the bottom step, and he was sobbing, his forehead buried in his knees, his entire body heaving.

David sat down on one side, and I took the other, and neither of us said a damn word. What is there to say, in a moment like that? Nothing. Words fail, Colonel.

We sat there with him there for a while, and Ethan cried, his father’s voice—his last words, I think, or some of them—echoing down the passage like a taunt.

The other doors on the street, they all opened. But the door Ethan chose, the iron one with the wooden inlays? It’s locked fast. I’m thinking it might lead us to some station controls.

If we can get in there, we might be able to dial down this place’s creepy factor.

What kind of station is this, anyway, throwing a dead man’s words in his son’s face? Who recorded that, who sent it here—and how?

I’ll update you when I know more.

And if you know more, Colonel, I don’t think it’s too much to ask for you to fill me in.