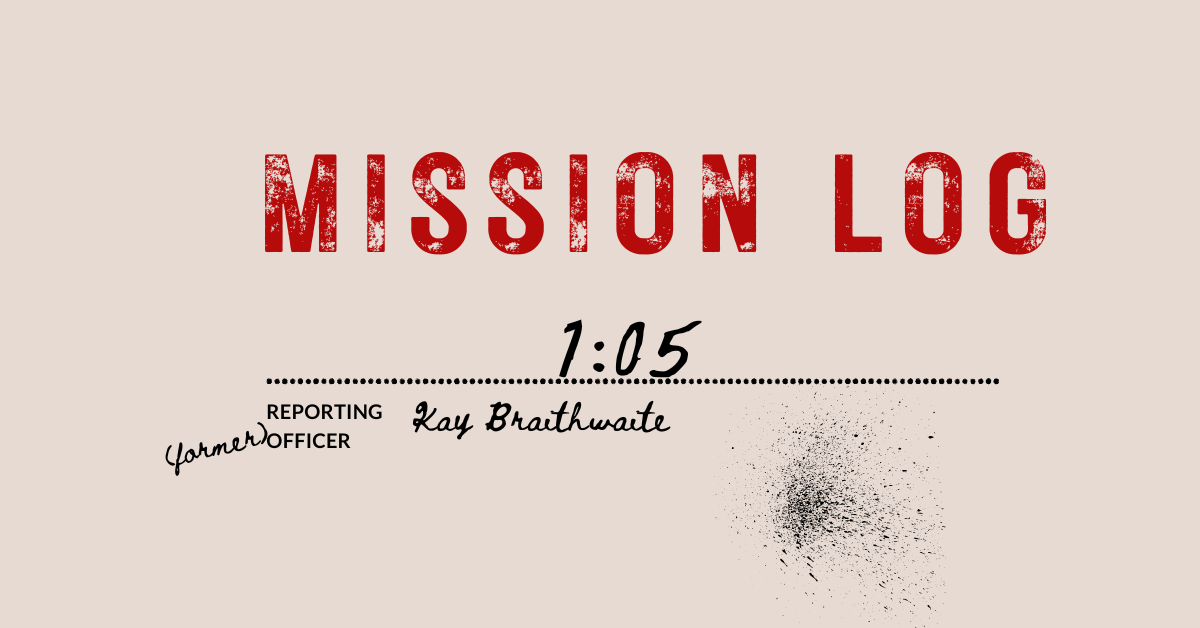 It’s funny, but after piloting a transport by myself for a couple days, landing on an abandoned station, and almost getting eaten by said station, I was completely exhausted by the time Mila and I rejoined the group of evacuees.

I took a spot by the wall, and she joined me. And for a few minutes we just kind of sat there, watching the others. Ford ignored our return, which was just as well. I might’ve punched the guy just for saying hello.

Mila was watching one of the groups in particular, a small smile playing on her lips. I followed her gaze over to the woman I’d seen her with on the transport—Harper, her wife I guess—who was talking quietly to another blonde woman with close-cut hair and puffy dark circles under her eyes. A couple kids huddled close to her, one with her thumb in her mouth, the other looking around with an expression that was half haunted, half curious.

With kids, it can be hard to tell.

The boy from the transport, the one who’d almost gotten us all killed, was sitting a short distance away from them, legs crossed, a book open in his lap. Seemed to me he was staring at it a little too intently to actually be reading it, though.

David appeared to my right and settled down beside me, handing me a bowl of rehydrated transport rations—noodles of some kind—and I nodded in thanks, suddenly realizing how hungry I was.

I did thank him before I started shoving food into my mouth, though. And for a few minutes, we just ate in silence. I guess I was feeling a little shellshocked, if I’m being honest.

“People seem to know each other already,” I said after I’d eaten enough to stop my stomach from trying to eat its way out of my body.

“Some of us talked on the transport,” David said. “You were busy rescuing us all.”

“You’re assuming I would have talked to people if I hadn’t been flying.”

“No wonder Ford got everyone to do his bidding,” I said, without quite meaning to. Like I said, I was pretty shot. Not sure I’d slept more than four hours together over the last few days. “Everyone’s all buddy-buddy.”

David shrugged. “Not quite everyone.”

I scanned the group again—there were a hundred of us, so yeah, it’d take some time to get to know everyone—and my eyes landed on an older man with longish gray hair, sitting by himself against the far wall. Just shy of the transport bay, he’d very clearly separated himself from everyone else in the group.

Something about the sharp lines of his face rang a bell, like I should know who he was. I’d definitely seen his face before, but then we’d all come from Wellington, hadn’t we? It wasn’t that big. I’d probably flown him on the transport a time or two.

As I was opening my mouth to ask about him, another passenger broke away from Ford’s little party and swaggered right up to the man in question. The older guy kept eating his food, even when the younger man’s shadow blocked the measly light from reaching him.

“When we run out of food,” the younger guy said, “I’m eating this traitor first.”

The older man dug a noodle out of his bowl and slurped it into his mouth, chewing deliberately and swallowing before bothering to answer. Which he did without so much as a glance at his attacker. “I was a traitor to the Hub, you idiot.”

Consider my memory jogged. The older guy, that was Arthur Cane. The other Alliance pilots always gossiped about him, said he was a Hub pilot in the war but that he deserted and showed up one day in Mandel. Told them everything he knew, or so I assumed. After the war, he kept to himself. Never caused any trouble that I could see, though people still thought he was a spy for the Hub.

I always figured the war was over. Bygones, and all that.

“Traitor’s a traitor,” the kid said. Yes, he was probably in his twenties, but sometimes I feel like everyone’s a kid to me. Especially [expletive] troublemakers who can’t leave well enough alone.

If he’d walked away right there, I’d have chalked it up to him being scared, just like everyone else, even if he seemed determined to express it badly.

Instead, he reached down and knocked Cane’s bowl out of his hands, spilling his food across the floor.

I was crossing the room before I quite realized I’d moved at all. I might not have been an officer, but I know how to get in a guy’s face. I stepped right up to the kid, even though he was half a head taller than me—I got an up-close look at the exaggerated thickness of the guy’s neck, let me tell you—and intentionally invaded his personal space.

The guy grinned, like he thought I’d come over to kiss him. He should be so lucky. “They call me Crash.”

“Yeah, I’m not calling you that. What’s your actual name?”

“His name’s Bertram,” Mila said. She and David had followed on my heels, which was nice of them. Probably didn’t want to see the old lady get knocked out.

Unfortunately, Ford had also decided to join us. He was frowning, which must really have strained his face muscles, and he was directing the expression at me rather than at Crash-slash-Bertram.

“All right, Bertram.” I waited a beat before taking a step back. “We’re all in this together, yeah? Move along.”

Bertram hesitated, looking around as if he expected someone to leap to his defense. But no matter Cane’s reputation, Bertram had clearly been bullying someone who was keeping to himself.

Yeah, a few of the others were looking at the older man with narrowed eyes. But mostly they looked worried, like the last thing we needed was for a fight to break out. The mom with the kids was pulling them closer, and Harper had stationed herself in front of them.

Finally, Bertram gave me a little mocking bow and skirted back to his corner. Before I could breathe a sigh of relief, Ford took his place. “You really shouldn’t antagonize people, Kay,” he said.

Ford stalked away, obviously to join Bertram and a mini contingent across the way. Factions, already forming. Excellent.

“Didn’t need your help, pilot.” Cane’s voice was like rocks scratching against each other. He didn’t look at me, just calmly collected his noodles and went back to eating—I doubt the five second rule was in effect here, but we couldn’t waste food, either.

Right. There’s a reason I keep to myself.

I returned to my own noodles, which were cold now but still tasted like something sent from heaven. Mila went to join Harper, and David took up his place beside me.

“That was good.” He nudged my elbow with his. “Pilot.”

“Yeah, it’s a bit too early for us to get all Lord of the Flies on each other. And I don’t think this place has boars.”

“Were there boars in Lord of the Flies?”

I shrugged. I knew the story by reputation only. It was one of those Old Earth texts that could be hard to lay hands on, though I’d always wanted to check it out. Some stories made it out here with us, I guess, but a lot of them are only mentioned within other stories. Lord of the Flies is one of those. Kind of makes you wonder what happened back on Old Earth, that made them leave so much culture behind.

“Maybe you can play everyone a song on that guitar of yours,” I said. “You know, something magical that will put them to sleep until they learn to get along. You know that one, right?”

David looked down at his hands, a small smile on his lips. “Yeah,” he said. “I’ll get on that.”

I had the distinct impression that I’d said something wrong, but I couldn’t quite sort out what it was. Before I could ask—and yes, I am that direct, I see no point in keeping random secrets—David pointed to the kid from the transport, who was still sitting by himself with his book in his lap. “I don’t think he’s had anything to eat,” he said.

Maybe he sensed I had no intention of leaving him to his secrets, because he got up, brushed his hands off on his pants, and left me alone.

I have a feeling it’s going to be a very long night.