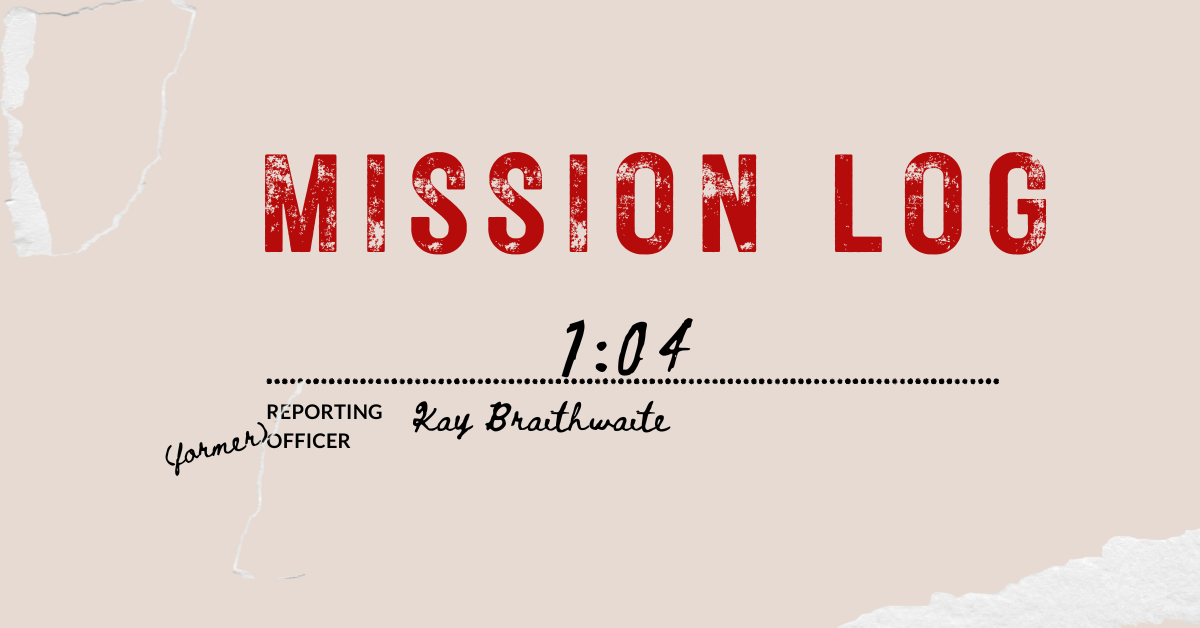 Stomping away from pretty-boy Ford felt good for about three seconds. I’ll nurse a grudge, no doubt about that; there’s no use forgiving people who don’t deserve it, in my opinion.

Still, it only took a few steps into the darkness for me to realize that storming away from the safety of the group— when we were stranded in an unknown station with unknown dangers—was a pretty childish move.

Yes, I was tired to the point of deliriousness, and I’m sure that played into my temper tantrum. But mostly, I was mad because I knew that Ford was right when he said I’m no leader. Or implied it. Same difference, coming from a politician.

I’m one of the best pilots the Alliance ever saw—try to contradict me, Colonel, but I doubt you can—yet I never rose far in the ranks. Attitude problem, mainly. And by the end of my tenure, I was specifically instructed to stay the [expletive] out of higher-up business.

When I didn’t, they saddled me with an honorable discharge and sent me packing. Honorable by a hair, as Captain Ross so recently reminded me. There’s not much honor in ending a career like mine more than a decade early.

I was thinking about Ross as I stomped through the station, too, and that just ticked my anger up another notch. Ross was a good man, and now he was gone, all because the Hub wanted what wasn’t theirs.

When my heel landed, it sent something small skittering away down the passage. The thing bounced a couple of times with a musical clink, then rolled to a stop.

I hadn’t been watching where I was going, or paying attention to my surroundings. (Foolish, I know.) But now, as the object I’d so carelessly kicked fell still, it was impossible to miss the wall just a few paces ahead of me. And the fact that it had begun to slide slowly open, revealing a gray hallway that hadn’t been accessible a moment ago.

I watched for a second, mostly to make sure I hadn’t unleashed an army of robots or something. It might sound unlikely, but this definitely seems like the kind of place that would be hiding a robot army.

When nothing emerged, I stepped over to the object and crouched to examine it, my knees popping on the way down. It looked like a coin, if a large one; about the size of my palm, it had grooves carved on the surface. The edge looked beveled, like a gear with hundreds of tiny teeth.

“Did that thing just open a door?”

I jumped when Mila—the engineer of the group, who’d been as suspicious of the station’s silence as I was—crouched down beside me, bending forward to study the coin. “You almost just gave me a heart attack,” I said. “I’m too old to be startled like that.”

Mila scoffed. “Please. Stop talking like you’re eighty when we all know you’re half that.”

She hitched an eyebrow at me. Yeah, I guess one of the things about being a public figure is that everyone knows everything about you. Including your solidly middle age.

I decided to change the subject, rather than admitting I’m forty-six. “Didn’t want me to get lonely out here?” I asked.

Mila reached for the coin, but stopped short of touching it. A wedding band glinted on her left hand, and I remembered seeing her back on the transport with her arm around a blonde woman. “Yes, but I also want to see if the station controls are nearby. The place is too quiet.”

Agreed. Even those doors had slid open with little more than a whisper. At the very least, shouldn’t the mechanisms be rusty?

I’d been half expecting her to convince me to see reason and turn back, but the buddy system was a decent enough reason to continue on. Besides, I wasn’t quite ready to face Ford, and that smug chin of his.

I straightened, knees cracking again, and pointed toward the doors. “Shall we?”

Neither of us moved to pick up the coin. I figured it would be better to leave potential door-opening tech where we found it.

Mila walked beside me with a graceful kind of ease, as if our whereabouts were of no particular concern. She had rich brown skin, and her sleeveless black shirt showed off well-sculpted arms as she looked around the station, taking in all the details I’d ignored on my way in.

The floor was pocked with rust, and the only illumination—aside from Mila’s flashlight, smart move—came from a hearty set of floor lights along the floor. The place left a metallic tang on the back of my throat with every breath, as if bits of rust were floating around in the air. But there was also an undercurrent of something… almost salty. Like the leftover brine of the sea on an inland breeze.

We passed between the walls, and something behind us gave a metallic clink. It sounded exactly like the coin’s fall, and I turned, trying to make it out in the dim light.

“Was that our coin, or a different one?” Mila asked.

I opened my mouth to respond, but the floor gave a violent shudder beneath our feet, slicing a crack straight down the center of the room. I grabbed Mila’s arm and yanked her back toward the wall, staggering in the direction of the doors.

But the floor was dropping too quickly, opening its own set of doors, and I barely made it to the edge of the room in time to throw myself down and grab hold of one of the edges. Because someone had installed doors in the floor of this room, and a set of hinges were working to drop us.

Where, I didn’t know. Probably a long shaft with wooden stakes to welcome us at the bottom.

“The coin,” Mila shouted, though it wasn’t really necessary since the killer floor-doors were nearly as quiet as the original set had been. Bit of an engine whirr, coupled with the rattle of turning gears. That was all. “Maybe it’s like a security pass.”

Pick up the coin, open the doors. Enter without it, get caught in a trap. Not the way I’d design my space station—especially given the coin had been just hanging out in the hall for anyone to grab—but it was a valid theory.

Plus, it’s not easy to think these things through when you’re hanging by your fingertips. Props to Mila on that.

“No problem,” I said. “We’ll just climb back over and lift ourselves out.”

Like I said, I’ve kept up my training. My arms aren’t bad.

But there was a problem, obviously, because why wouldn’t there be? As soon as the words left my lips, the doors the coin had opened began to slide shut.

I had a feeling that ‘down’ was about to be the only way out of here.

Planting the balls of my feet on the wall beneath my feet—which had previously been the floor, thanks Murder Station—I shifted my grip to the left. When I didn’t fall to my death, I shifted my grip again.

Now I’d moved about a foot.

The doors were closing as slowly as they’d opened, but at this rate, I wouldn’t make it there by Christmas, let alone before the doors shut us in. Mila might’ve gotten there faster, but she was on the wrong side which meant she’d have had to climb right over me.

There was really only one option.

“We have to walk along the edge.” I was already straining to haul myself up, and even though I keep up with my push-ups, pulling my entire weight up with only my fingertips was a very different kind of deal.

Luckily, Mila must have trained in that very thing, because she saw where I was going with the idea and used her much more sculpted muscles to vault up to the ledge.

Okay, she didn’t exactly vault. But compared to my scrabbling, it felt that way. Luckily, she was able to balance enough, somehow, to give me a hand and help me up. She might be part squirrel. Not sure.

Now we were standing on a precariously thin ledge—my toes peeked over the edge—with the wall too close behind us to let us turn sideways.

But at least we could inch along faster than snails.

“If I fall to my death,” Mila said, “tell Harper that ninjas wipe the floor with pirates, every single time.”

“If I fall to mine, tell my ex-husband I’m not sorry.”

Mila snorted. And then we were at the doors.

If it was hard to inch along with a stable wall behind us, just picture the fun of trying to do it with a moving background. I’m not actually sure how we managed to make it to the gap. Magic, maybe. If I slipped, Mila was there to steady me. I tried to do the same for her, though it wasn’t easy, with my back to her.

We did it, though. I slipped through first, and you’d better believe I dove straight for that coin. As soon as I picked it up, the doors opened again, and Mila stepped easily back into the hall.

Okay, so we didn’t learn much about the station, but we did make it back to camp without falling to our deaths, or getting skewered on murder stakes. That’s not nothing.

You know what I think, Colonel? I think the coin remote was out to get us. And it might sound nuts, but I think this station doesn’t want us here.

From what I know about these outposts, they’re supposed to be waypoints: spots for travelers to stop off on their way from one part of the system to another. But this place is hiding on the cold zone—it’s not on the way to anything—and aside from its massive size, I have to ask: what kind of station has traps like that?

What is this place?

You know what, actually, don’t answer that. You’ve read this far, so by now you know I’m more of a liability here than I am a help. I stomp off, I kick coins, I’m just generally reckless and unreliable.

But I can follow orders from officers. Cross my heart, I really can.

Respectfully, I’d like you to reconsider allowing me to return to the Alliance as a pilot.

You need me. This place absolutely doesn’t.

Waiting on your reply.