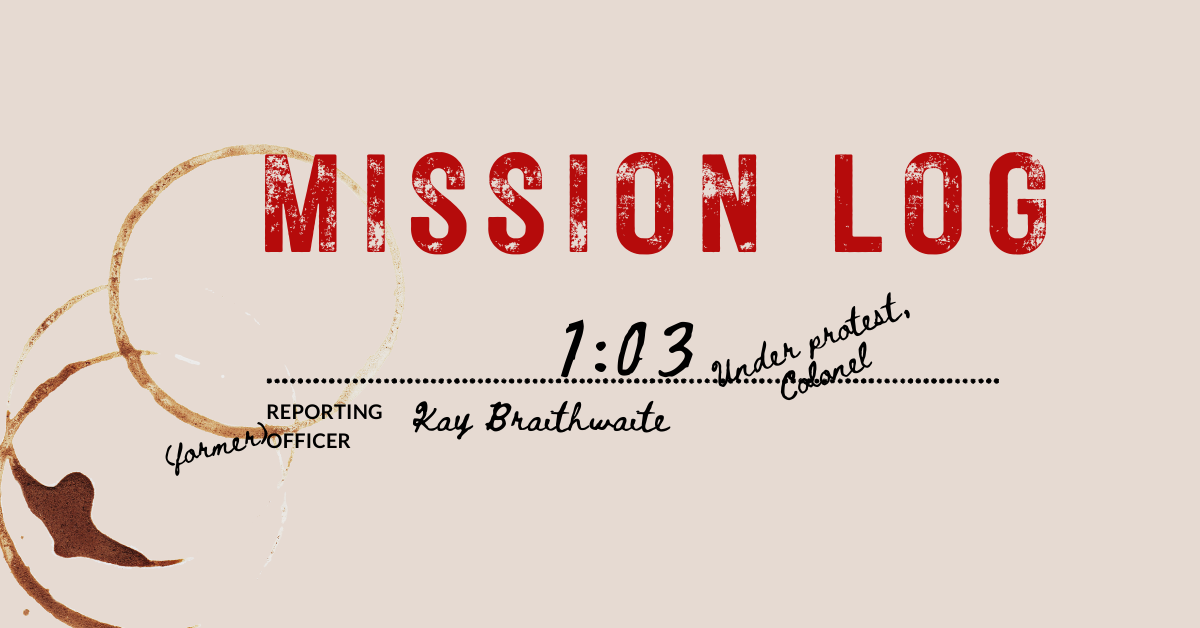 Your denial came in so quickly, Colonel, I’m inclined to think you didn’t read the full report. But okay.

So much for keeping an open mind.

We reached Ross’s coordinates at 2100 Alliance time, and I’m at a bit of a loss to describe what we found here. Let’s call it a space station, though I’ll be damned if I’ve ever seen one like it. Scanners estimate it at half the size of Mandel’s smaller moon, which makes the diameter close to a hundred kilometers. Only it’s just hanging out here in the nowhere of space, so far from the center of the system that our Star is smaller than a thumbnail.

The station’s shaped like a hexagon, and each side’s got an extension like… Well, David called the petals, because he’s a damned romantic, but one of the more practical passengers—Mila, an engineer—said they look like tongues. I’d say that’s more accurate.

I landed the transport on one of the tongues—it was the only option, I assure you—and after a beat, it pulled us straight inside. Some kind of weight-activated track in the floor, which dragged the ship through a door, pressurized the bay, all that stuff. All the while, I was just telling myself that Captain Ross’d been a competent officer. That he wouldn’t have saved us just to send us somewhere dangerous.

I’ll admit I thought we were heading for some super-secret, fully stocked Alliance base. It sure looked that way, from the outside.

But when the transport stairs finally drifted down and I poked my head out into the bay, the place just felt… silent. Not just that it sounded silent, but that it actually felt silent, the absence of noise ringing through my ears and into the hollow of my chest. An extension of the void we’d just crossed.

Don’t get me wrong; after the rattle of the transport, I’d’ve expected the place to seem quiet. But with breathable air and artificial gravity running full steam, it shouldn’t actually be quiet.

No one came out to meet us.

I’d barely made it down the stairs before one of the passengers was pushing past me, barreling out into the bay like we’d just landed in a theme park and he was supposed to be our guide. I recognized him as Somebody-or-Other Ford, because I’d seen his face running for office back on Mandel.

Never won, interestingly enough. But he did keep trying.

“It’s safe everyone,” Ford called back. “Gather your belongings and come on down.”

He’d walked halfway across the bay, and was now turning a slow circle to take the place in. A pair of glass doors opened before him, and he sauntered right through. Might as well be a hotel lobby to him.

“We should stay on the transport,” I said, well aware that I was contradicting myself by following him out of the bay and into the main part of the station. I stopped walking, positioning myself between the doors in case they decided to close on me and lock me away from the ship.

The other passengers were picking their way down the transport steps, a few of them on our heels and looking around tentatively. Mila, the engineer, reached me first. She gave me a look like totally, we should be careful, not act like idiots. Even David was nodding, and if anyone expected to find unicorns and rainbows on the station, it would’ve been him.

Everyone else, though, was following Ford into the yawning maw of the station, dropping their bags next to the wall, hugging each other like they all believed they were definitely safe now. Ford kept saying what a nice spot this was, as if his words could wipe away the fact that it was a dusty, derelict mess.

The room reminded me a bit of Dawn base, with all the cracked screens attached to the walls and the faded paint directing visitors along different passageways. Dawn always felt like a waypoint, so many people coming and going.

This place feels like a ghost town. Ghost station?

“Again,” I said, a little louder this time, “I think we should stay put. Stick with the transport until we have a chance to explore.”

Ford noticed me, finally, and sauntered back over with that politician’s smile on his face, smelling strongly of vanilla hair products. He’d found his audience, and he wasn’t about to let it go. “And I think you did a good job of piloting us, Kay.”

“A good job?” I said. “I did an [expletive] brilliant job of piloting us here.”

He clapped his hand on my shoulder. “And now you can let the leadership take over.”

Mila had her hand pressed to the wall, like she was feeling for a vibration or something, anything to indicate the presence of the machinery that had to be running life support and gravity. She had to be thinking the same thing, about the place being too quiet.

I could have probably staked a claim right there. Laid down the law. I bet people would’ve listened to me. But we’ve been on that transport for three days, and at least a few of them would’ve followed Ford out of the pure desire to stretch their legs.

And looking around at these people, the last thing they need is to walk into another war. I’m just an old pilot. Not a leader. Certainly not a politician.

Ford frowned, folding a delicate little wrinkle into the gap between his eyebrows. “We should stay together, Kay.”

I think you can probably guess where I told him to go, Colonel.

But the tech strip’s beeping at me now, which I think means you installed a reminder for me to send today’s log over. So you’ll have to wait until tomorrow to find out what else is here.