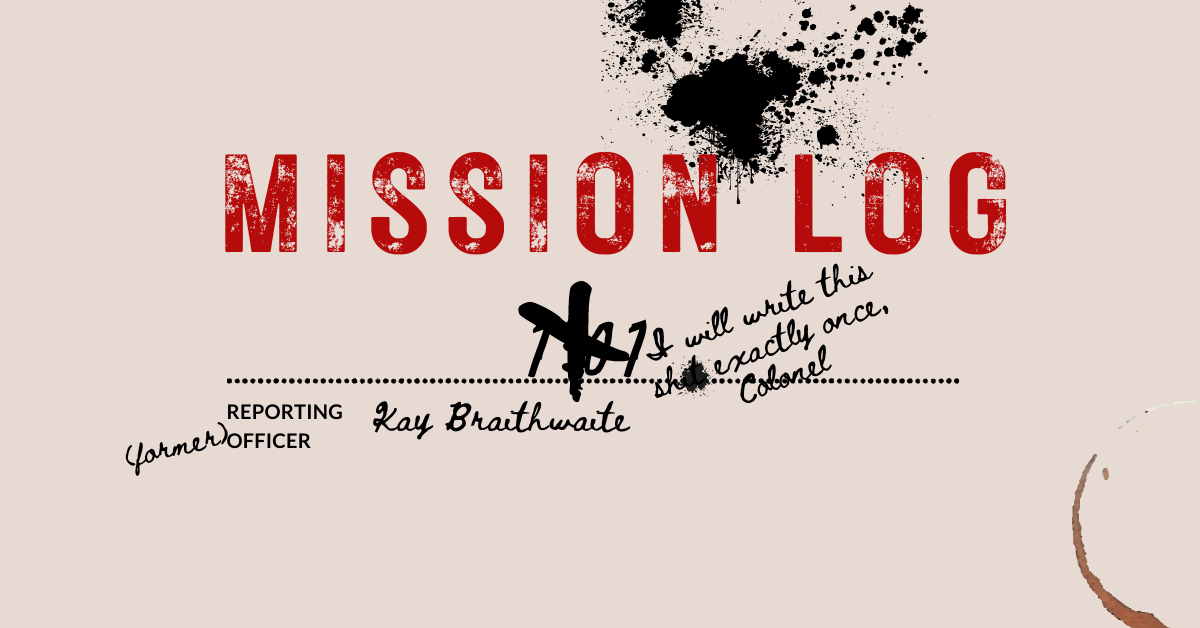 That’s what I tell the passengers who board Transport XF-45 every day when they catch sight of me in the pilot seat.

Kay Braithwaite! they say. No way! and then, inevitably, what are you doing here?

Not sure where they’d expect to find me. Hiding in a desert cave like a hermit, maybe. Or sipping wine in some grand estate.

I could tell them it’s just that I love flying, and that’d be true enough. But it’s hard to love a clunker like the XF-45, and even the civilians are smart enough to catch on to that. I like to stick closer to the full truth, so I give them the line about retired heroes.

They laugh, I laugh, and we all move on with our days.

Except that this morning—of all [expletive] mornings—the kid who asked the usual questions did not move on with his day. No, he plopped his butt down in the first row, and stretched the strap to its full length so he could lean over my shoulder.

“Can we fly over the Alliance base on the way out?” he asked.

I ran through my final checks, made sure all the switches were flicked and doors were sealed. “We’re flying over the Capre Sea, kid,” I said. “Opposite direction.”

The kid leaned closer, and it took a pretty big effort not to bat him away. His breath smelled like bubblegum. “I’ve flown on your transport fifty times. Thirty of those times, you detoured over the base. Cuz you love it, right?”

“Do I want to know why you’ve been on my transport fifty times?” Seemed like the worst kind of punishment, far as I was concerned.

The kid sat back in his chair, finally, and I swore I heard the straps sigh in relief. “Mom lives in Second City.”

“Never understood that name,” I said. “Where’s the first city?”

I was trying to cheer the kid up, but he just frowned at me. “Wellington.”

He shrugged, like he didn’t want to admit it, but he was too young to pull off the casually apathetic teenager thing, so it just made him look kind of twitchy.

I swear, the kid kept his nose glued to the window the whole time. And yeah, I guess I do fly over the base sometimes because I like to see the planes, tip my figurative hat to the old girls. They’re not all that different from when I flew in the war—noses a little sleeker, maybe, the paint a little shinier—but they’ve seen significantly less action. Next to none, really, which is a positive thing. Being in peace times, and all.

At least, I thought we were.

As I veered the transport away from the base, Mandel’s violet sky was clear. Completely clear, except for the usual wisp of haze along the horizon. Not a cloud, not a storm in sight.

And then, like someone had flipped a switch, it wasn’t clear at all.

The fighters wavered into the atmosphere like a swarm of pissed-off dragonflies. Heavily armed dragonflies, their bodies hanging heavy with the weight of their pill-shaped missiles.

The kid definitely saw them, too, because he gasped. I was already swinging back around toward the base, because I know Hub ships when I see them.

The other passengers didn’t. Well, aside from the kid, who’ll make a good pilot someday, I think. The rest of them didn’t even start murmuring until I turned the transport around. Probably still worrying about being late to some business meeting, some birthday party.

They should have been worrying about getting there alive. But I can’t expect everyone to recognize a Hub ship when one materializes out of nowhere. Most of these folks were in diapers the last time one showed up in Mandel’s skies.

When the transport touched down, I grabbed the announcement mic and barked something into it about everyone staying in their seats. I hoped it was intelligible, but honestly, clarity wasn’t the first thing in my mind.

The stairs were still shuddering toward the tarmac when I jumped down and ran across the airstrip. Yes, my ankles were smarting because I’m not sixteen anymore, but they didn’t snap, so I was still ambulatory.

Captain Ross was easy to pick out on the strip, with that red hair of his. All those medals, too. Blinding.

“I already know, Kay,” he said when he saw me, biting out the words like I’d just added a new problem to his day. Like he hadn’t been little more than a baby fledgling when I retired. Like I wasn’t one of his mentors.

Ross snatched a flight helmet from a passing lieutenant, then pointed to the transport.

No guns, for one, and the thing was much too massive to swivel a decent corner.

“We’re going to carve you an escape route,” Ross said. “You need to get these people out of here.”

My mind stuttered. Surely we could deal with a few measly fighters. “An escape route? What, from Wellington?”

Ross leaned in closer, glancing over his shoulder. “From the entire [expletive] planet. They’ve got the moons, Kay.”

He shoved his hand in his pocket and pulled out a tech scroll, the thinnest one I’d ever seen. It was all rolled up and crumpled. I never saw the point of those things, honestly. “Get the people out of here, follow these coordinates, and use the strip to report to Colonel Nadir back at Eos Base. Tell him what happened.”

“One,” Ross said, “you were honorably discharged by a hair. Two—”

“You don’t have enough pilots.”

“We’ll manage.” Ross grabbed my hand and shoved the tech strip into it, closing my fingers around it. “The Colonel, Kay.”

I would have argued more—or asked about that number two reason he was about to spout at me—but a strip of fire ignited the far side of the runway, and the Captain made a run for it, shouting orders at his pilots that they could hopefully hear through their headsets.

As for me, I booked it back to the transport. Just in time to see a man charge down the steps, a huge pack tethered to his back. I mean, that thing took up half his body, and it was bouncing so hard against his backside that it had to be slowing him down.

I was still running, and I had no headset, so all I could do was to scream at the top of my lungs. “Get back up there! We’re leaving!”

But the guy kept running, extending a finger toward the hangar full of planes as he went. With fire toasting the side of my face, I followed his gaze.

To where the kid who’d interrogated me on the transport was beelining for the closest fighter.

[Expletive], I thought. And then I followed the passenger across the tarmac.